As the winter festivities approach, Spanish households start to fill their food cupboards with traditional Spanish Christmas sweets. Later during the holidays, they share them with great joy around dinner tables.

Some of these Spanish treats for Christmas are only made in specific towns in the country. The so-called “mantecados” are one of the best examples.

The quaint little town of Estepa is the main centre of production of these typical Spanish sweets.

Estepa is a whitewashed monumental gem on top of a hill, surrounded by endless olive groves right in the centre of Andalusia, the Southernmost region of continental Spain. 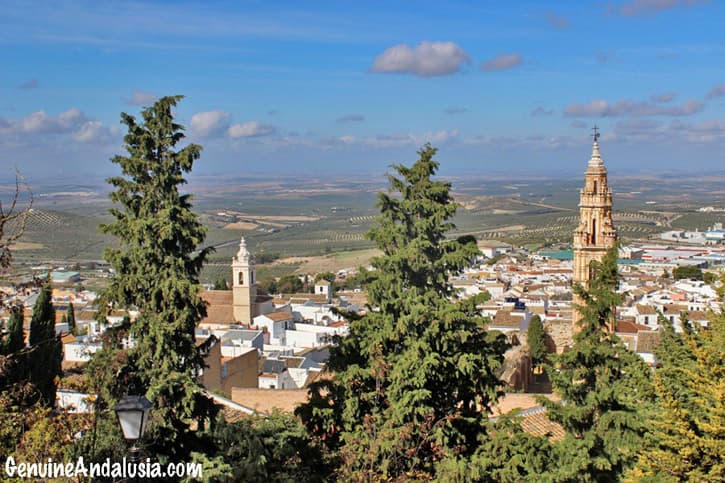 We recently went on an exploration journey to Estepa, to learn the secrets behind mantecados. We knew we would definitely enjoy ourselves because we are big fans of these local delicacies. However, we didn’t expect to find such a charming local industry of traditional Spanish Christmas sweets there.

In Estepa, traditions, self sufficiency, innovation and new market perspectives are helping to maintain the town’s economy, character, identity… and aroma!

Can you imagine arriving to a town where the air has a lovely scent of cinnamon and roasted almonds? Yes! That’s the case of Estepa, where there are about 30 different factories of mantecados today.

Mantecados are basically a baked mixture of toasted wheat flour, sugar, pork lard, cinnamon and roasted almonds. There are different varieties depending on the extra ingredients that they may have. Amongst them cocoa, lemon peel or sesame seeds are the most popular. 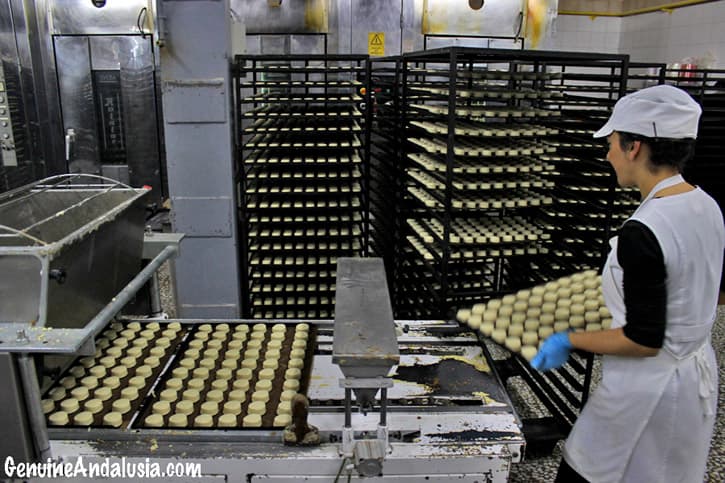 These genuinely Spanish Christmas sweets have been popular amongst Estepeños for many centuries.

However, they didn’t start to sell beyond the limits of Estepa until the late 19th century. It was back then when their popularity began to spread. This shaped a very basic artisan industry in the town, with tiny little factories of mantecados located in families’ garages.

As the demand of mantecados increased all over Spain during the 20th century, these family-run businesses had to grow. This slowly resulted in the solid industry of traditional Spanish Christmas sweets that Estepa has today.

Nowadays the factories are not so small anymore, but they still follow traditional recipes. Most of these factories are still family-owned and family-run. Besides many of the machines they feature are made in Estepa too! 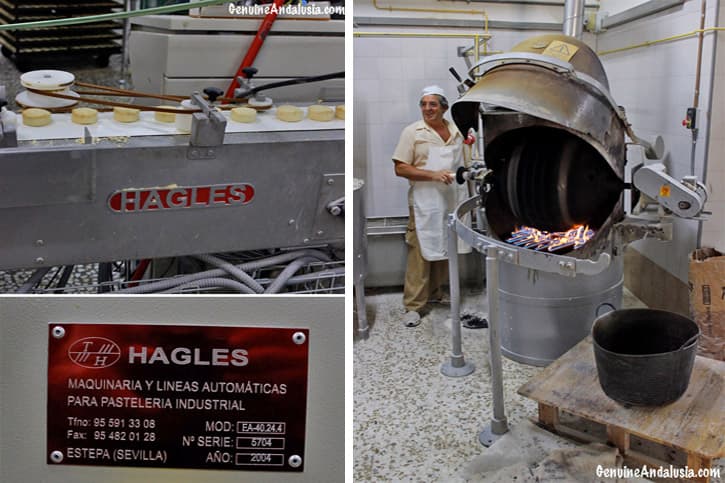 We were very lucky meet and visit the factory of Mantecados of the Gamito family.

Their company is called Dulces Gamito (Gamito Sweets) and they produce some of the most delicious and freshest traditional Spanish Christmas sweets in Estepa.

This is because they only produce them on demand. 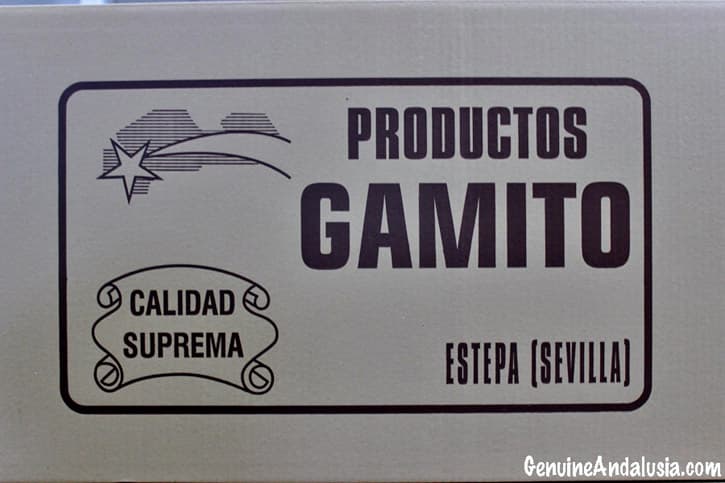 Visiting their premises felt like being in someone’s house. The warmth of the ovens, the aromas of toasted flour and roasted almonds, the smiles and kindness of the workers (who wouldn’t stop offering us freshly baked mantecados all the time) and the beautiful packaging of their produce, allowed us to feel the cozyness of a home in a small factory.

This homey taste is also present in their mantecados which are made with the best quality ingredients (they only use iberian pork lard for example) and follow family recipes. 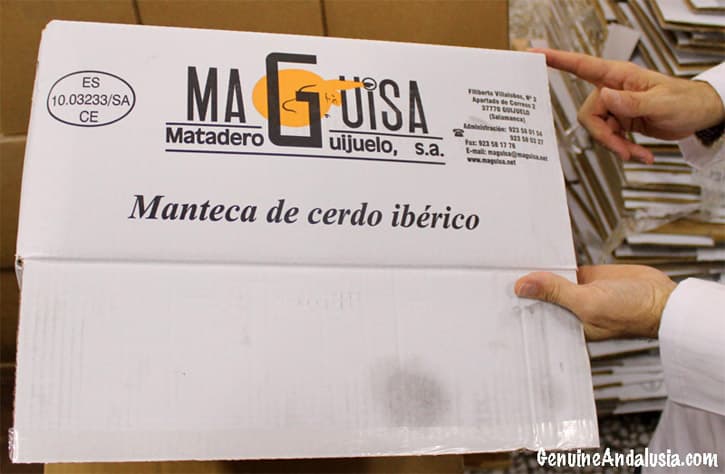 Up to 60 people work in Dulces Gamito from September to December. During these months, the factory is in full production in order to cover the Christmas demand, coming mostly from Spain. 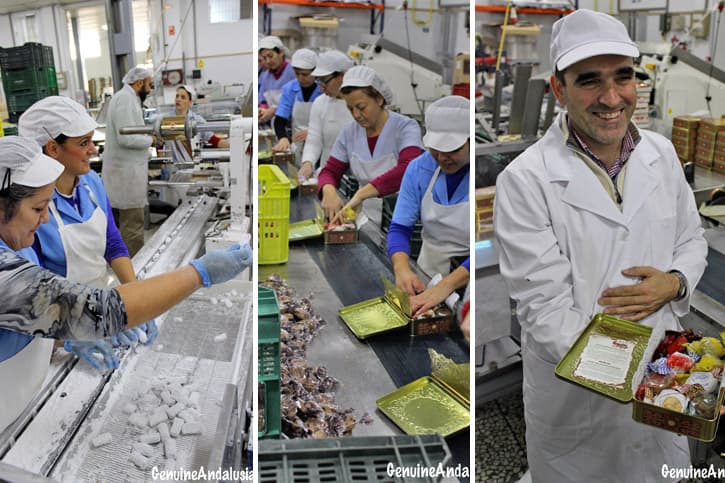 However, Dulces Gamito has started to adapt its typical Spanish Christmas sweets to different markets, in which they are not conceived as seasonal produce. 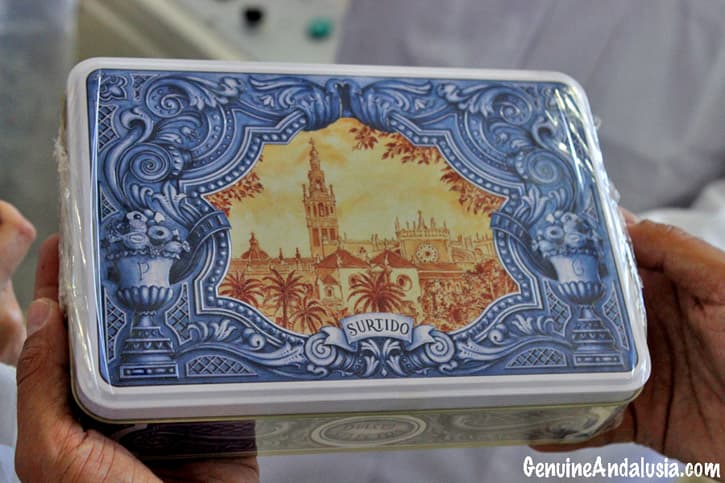 This is now helping to keep the factory also open from January to August and with a staff of 10-15 people.

The most interesting example of adaptation of their traditional Spanish Christmas sweets to new markets is the case of their Halal sweets. By substituting pork lard for olive oil (also from Estepa), they have created a whole new range of Halal products.

Nowadays these are being exported to Muslim countries like Morocco and to other countries with large Muslim communities such as France, Belgium, Holland and Germany.

Every year, Dulces Gamito gets certified by the Halal Institute in Córdoba so that their Halal sweets can proudly show the Halal certification in their packaging. 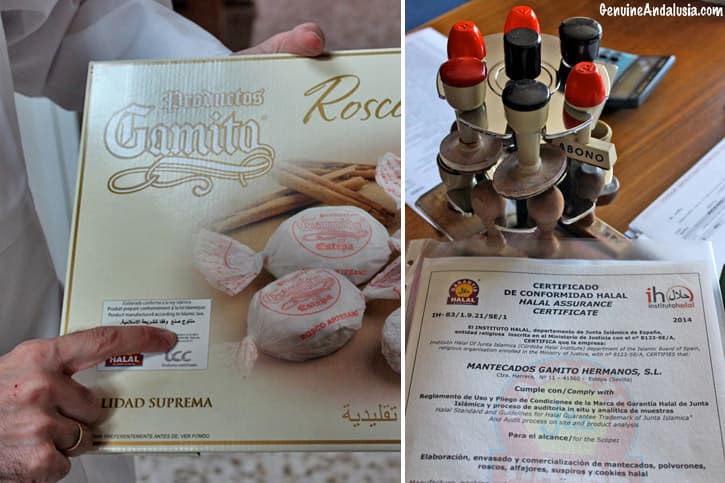 Small local businesses, culture exchanges, good food and openness to new perspectives are concepts for which we have a weakness. So we couldn’t help falling in love with Estepa and with its iconic industry of typical Christmas sweets for many reasons.

We are immensely thankful to the people who work in the local food sector in Andalusia, because we love to share the wonders of our local gastronomy with our guests during our tours.

Come on tour with us and experience the tasty experiences that Andalusia has to offer. We will be delighted to take you onboard!

Learn more about our food and wine tours of Andalusia